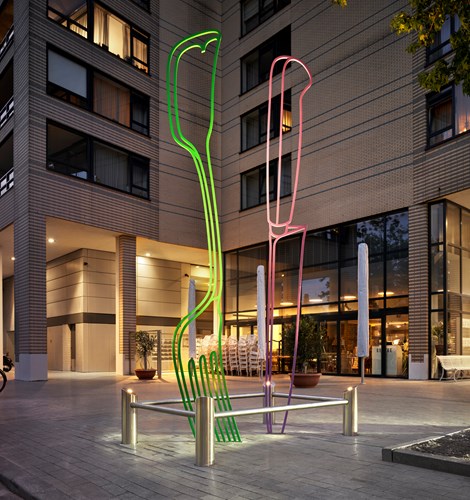 Michael Craig Martin (1941) is an British born, American educated conceptual artist. In the late 1970s he began to make line drawings of ordinary objects, creating over the years an ever-expanding vocabulary of images which form the foundation of his work to this day. Since 2011, Craig-Martin has been working on powder-coated steel sculptures that bring to life some of these quotidian objects, which have saturated his oeuvre for decades. Fork and Knife, presents two standard pieces of silverware as if they were line drawings suspended in air. These actualized drawings come to occupy a dramatic position in space; that is, they are realized in grand scale, yet maintain the impression of having very little mass or dimension.